Operation 21, LLC is owned and operated by Brian and Anna DeBlois. Brian, being in law enforcement since January of 1997 (+17years) Brian saw the need to educate citizens that had been sentenced by the courts in relation to Georgia Law. Through a detail outline of Georgia case laws, Federal Firearms Act and Firearms on Federal Property, not through interpretation but from an enforcement perspective. Laws are explained as what is acceptable in our community; elements of the crime, reading/ understanding O.C.G.A., and a detailed explanation of the consequences for their actions. This process better educates the gun owner and has proven to reduce recidivism by giving the tools to citizens in our community to make better decisions in the future. An overall respect is gained in the process for law enforcement, prosecutors, and the court system in general as gun owner become more responsible.

As Pretrial Diversionary programs are becoming more and more utilized within our community as the focus has become more on changing behavior through educational programs. The overall goal is to reduce recidivism through education while saving prosecution and judicial resources for more serious crimes. This program will help avoid formal prosecution and labeling of citizens who violate the gun laws within our community. Without helpful programs like Operation 21, violations may become a deterrent in gaining jobs or future educational endeavors.

In today’s society education is the key to success when it comes to saving lives. Operation 21, LLC offers this education to any violator by teaching the liability and responsibility each citizen has when he/she makes a bad choice.

Operation 21, LLC has designed a program for our Judicial System to utilize. Each class is taught by active P.O.S.T. Certified Instructors who are off-duty or retired. Our program includes a Pre-test and a Post-test which a 100% accuracy must be obtained.

Weapons are an intrinsic part of US society, culture

“The number of guns in the U.S. has increased by more than 60 percent since 1994. Latest figures show there are 310 million guns in this country of 307 million people. That’s more than one gun per person”.

Armed to the Teeth: Gun Ownership in America

New Findings From The FBI About Cop Attackers & Their Weapons

Nearly 40% of the offenders had some type of formal firearms training, primarily from the military. More than 80% "regularly practiced with handguns, averaging 23 practice sessions a year," the study reports, usually in informal settings like trash dumps, rural woods, back yards and "street corners in known drug-trafficking areas." 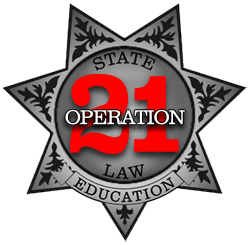 Questions about registering for a class? Need any other information from us?

Our Drug / Alcohol Compliance and Georgia Law Classes are in high demand. And space is limited. Be sure to register as soon as possible to secure your seat!

Register for a class

Register For A Class

Register For A Law Education Class